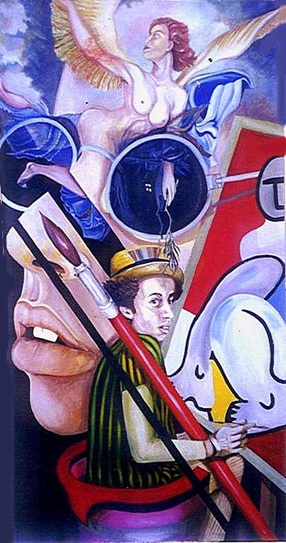 Angelo's portrait, by his father Michel 1997
Angelo Pierlo was born in Aix-en-Provence in August 1980. He spends most of his time drawing from the age of six. His father was dancer and painter. He lives must of his childhood in his grandfather house, wo collecting Marseille's painters. Angelo draws birds and animals. He signs his first oil paintings at the age of 13. His first exhibitions will be in 1996 between Aix en Provence and Paris, then Cannes, Monaco and Nice. He lives and works in Paris from 1997 to 2006. He then lives in Berlin and starts to work in Vienna regularly from 2007. Angelo Pierlo drew up a manifesto on the "philosophism" movement, and was meet after by, Laurent Godard, Jean-Marc Musial, Fleur Matinat, Harry Gaabor.  One of his canvases is sold to the Palace of the Dorotheum in Vienna in 2010. In November 2013, he celebrates his twenty years career surrounded by a large number of his collectors and partners at the Chaudronneries de Montreuil (Paris), where he presents his project Opus Philosophia for the first time in France. This project brings together 300 paintings by 2-meter high and 1 meter wide each, and retraces human history. Angelo Pierlo also works indoor furniture, private or public murals, and makes numerous public performances. You can today find his paintings collection in France, Italy, Austria, the United States, England, Italy, Corsica, Japan and Belgium. Until the year 2015 Angelo carving stones steatitis gray or marmer, and works clays sculptures.
View More